Rick Lindsey is Racing into the Waters of Key West

The president, CEO and chairman of Prime Insurance Company is looking to Race World Offshore Key West Championships for one of his next crowd-drawing ventures. Rick J. Lindsey has been on the water since his adolescence in Utah’s Salt Lake Valley. Those races are set for Nov. 6-13.

While his penchant for sports saw him to the last round of cuts for the United States’ national ice hockey team for the 1980 Winter Olympics, it would be his attention to emerging demands in the insurance industry that put Prime on the map. After settling on a place in Summerland Key, Rick, as he prefers, is teaming up once again with Powerboat P1/P1 Offshore for the annual week of racing with his XINSURANCE. 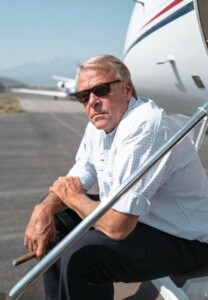 Do you remember the first time you saw a boat you really wanted to drive or own?

Rick: Lake Powell, Utah. Cruiser yacht. Twelve years old. Bullfrog Marina. We had a small ski boat tri-hull. I learned to waterski behind. My dad’s friend Roy had a nice 52-foot cruiser. It was nice.

What made it so nice? The freedom? The aspiration? Fun?

Rick: All of the above, including very comfortable — it had air and heat. Lake Powell has hot days, cool nights.

Were lakes or beaches more accessible as an adolescent?

Rick: Now I visit beaches and lakes all over the country. As a youngster, it was local small cold mountain lakes and Lake Powell and skiing in winters.

Did you pursue early jobs that facilitated access to the water in some way?

Rick: I was always thinking up ways to make money! Started an egg route to ladies around my house, worked at the local rental store, was a dishwasher, sold Amway and Kirby vacuums. Was big into football from the age of 6 and played quarterback until I graduated high school. Started playing my favorite, hockey, at 19. I was invited to try out for the Olympic hockey team in 1979 and was cut. They went on to beat the Russians — Miracle on Ice. Then I started my insurance in 1981.

Was there a specific type of insurance that seemed more attractive?

Rick: Specialty insurance of all kinds like Lloyd’s of London, property and casualty liability, death, and disgrace. Special events like the most recent Rolling Stones USA Tour during COVID, even Lloyd’s declined, but I wrote it!

How did you connect with The Rolling Stones team?

Rick: In 1994, I started issuing Lloyd’s coverage nationwide. As a Lloyd’s cover holder, l would issue A-rated Lloyd’s paper, because I had taken over Prime in Illinois and it was in financial trouble. It was C-rated. AM Best rates insurance companies and Lloyd’s and their syndicates.

I issued Lloyd’s paper for over 20 years, but as I became A-rated, I experienced them getting involved in claims and hurting my insureds and my profitability. So, I only issue my own paper now: Prime Insurance Company.

The Rolling Stones went to Lloyd’s and a broker referred them to me when Lloyd’s declined to issue due to prior claims, age of artist and COVID.

One of the requirements is that me or one of my named underwriters must speak with each insured. I spoke with Mick, Keith and Ronnie before issuing a quote and coverage via Zoom.

What put specialty insurance on your radar? Is it considered particularly niche compared to life insurance and standard property?

Rick: Need. Providing solutions. 1985 was an insurance crisis. News headlines highlighted businesses that couldn’t get liability insurance and were unable to operate: helicopter ski guides, rafting in the Grand Canyon and West Virginia, hunting, horseback riding, skating rinks. I was able to provide liability insurance and have grown from $2 million in premiums per year to half a billion last year! Now we help trucking companies, recreation, pizza delivery, contractors, all targets of the plaintiff lawyers seen on TV. Most recently, we are writing homeowners nationwide including Florida, California, and wildfire areas.

Do you credit yourself with creating a new sub-market?

Rick: I provide solutions as the larger insurance companies run from trouble. I have always seen opportunities in business others run from. Forty years nationwide and Katrina was my first challenge with a CAT [deductible].

What makes Key West interesting this round? Were you a longtime visitor?

Rick: Over my life of 61 years, maybe 10 times. Last year, good friends of mine from Naples, Jeff and Peggy, who rent a home for a month of fishing, mentioned it. I asked him if they would mind me renting a separate house and bringing down my 39 Yellowfin and all its history. Love the Keys!

Rick: I purchased a house and have demolished it and have plans to build a new home. For now, we rent homes a lot from Summerland to Key West.

What was the origin of XINSURANCE as it relates to Prime?

Rick: Evolution Insurance Brokers is my brokerage since 1994 and XINSURANCE is a DBA as was my idea to start introducing new products and create a brand that eventually people will identify as a specialty option instead of thinking of Lloyd’s of London.

Tell me about your entry into the boat races and week of events here last year.

Rick: I met Alex Pratt from a broker I know from Chicago now living in Naples — Tim Mahler with HUB International. First, I sponsored his Turbine Mystic two years ago and met the P1 Offshore organizing team and the other race team.

Alex and I attempted to sponsor a Cayman Island team the Red Victory XINSURANCE boat for the first two races of the P1 events. The boat broke both races so Alex and I formed a new partnership XINSURANCE Racing and Good Boy Racing. Teamed up with a new MTI for the last two races, first in Michigan City, Indiana — wild waves. We took third and broke the boat. Removed the engines, fixed the boat, and had the boat in the next Race in St. Pete. Where again, we took third.

These boats take a pounding, but they are made for it, repairable, and with a good team we should continue to improve. Keeping everyone safe is the first priority. Having fun with good people and playing the game to win.

Could you explain the economics of “boat week?” Why is it such a money maker?

Rick: Money maker for who? Key West? For me, I get to bring clients, agents, and brokers to a very unique event and provide them nice events and settings to do business and have fun, but it costs money to entertain claims.

Is there artistry to be found in the execution and presentation of these races?

Rick: Like all things, yes, doing anything against the best, challenging the competition is how everything evolves. I find it in my business, underwriting is evaluating people and risk. The courts and execution is critical to the individual and the industry, and homeowners. Making happy customers and doing what others say cannot be done is rewarding and builds lifelong partnerships. Art is just like writing or painting.

Are there areas of the arts you would like to be involved with more intensely?

Rick: The art of insurance is my focus and life and helping good people who struggle with the stupidity of some insurance. I don’t compete with stupid. True peace of mind!

Which one event during Race World Offshore are you looking forward to the most?

Rick: Flying my helicopter over the boat with the cameraman is the best! The concert is the new event we hope will be the cherry on top of a great week.

Do you ever wonder about how different your life may have been had you played hockey at the 1980 Winter Olympics?

Rick: That would have been really cool. However, I am very happy to have built a better insurance company outperforming the biggest and best that said it couldn’t be done. I help people and businesses when others would shut them down. I go to court and win frivolous litigation and have near 300 employees and their families that are part of my family! Had I made the Olympic hockey team, maybe we wouldn’t have beat the Russians? But everything works out for a reason, and I do not believe I could be any happier than I am today!

Interview has been edited and condensed.