How to Recognize Stress in Your Dog

When a friend is feeling stressed about something, we know that subjecting her or him to a practical joke is inappropriate. Likewise, when your dog is stressed, you need to modify your behavior accordingly. The appropriate behavior towards a stressed dog is removing or stopping whatever is causing this stress. Don’t attempt to comfort your dog by petting or holding it. This will likely cause greater stress because it simply isn’t “in the mood.” Once you know what to look for, it’s easy to spot stress in your dog and avoid any animal liability problems.

There are signs of stress that are universal in dogs, some of which resemble stress behavior in humans. These include: 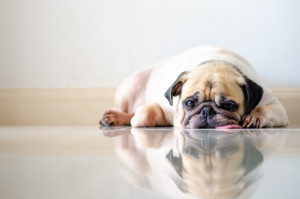 Avoidance behavior is easy to read. A dog that backs away from someone’s approach, turns its head away when attempting to pet it, hides behind its owner’s legs or a chair, are a few of these behaviors. Avoidance behavior in dogs is often adaptive and linked to survival. When dogs display this behavior, they are trying to avoid situations that may have been linked to negative outcomes in the past. The dog could even get up and leave a situation it’s unable to tolerate, which is not unlike a person leaving an unpleasant social situation. When avoidance occurs, the person should immediately disengage from the dog. Don’t force your pet to stay in a situation that is causing it anxiety.

A dog that’s trying not to act on its feelings of stress will substitute other behaviors that seem out-of-place. For example, a dog may lick its chops when there’s no food around, yawn when it isn’t tired, or bite at itself. This is similar to when humans may chew on pens, twist rings or bite our nails. When you see these out-of-place behaviors instead of its normal happy demeanor, immediately stop whatever is causing this behavior. Never turn to punishing your pet for exhibiting a displaced behavior because that will only add to it’s anxiety. 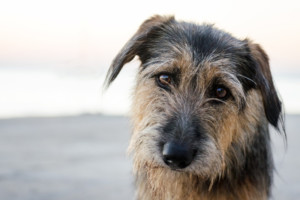 A common behavior is looking at someone with its head turned slightly to the side. This reveals the whites of its eyes and is called whale eye. Other behaviors include frequent glances at you (its owner) for direction, a direct stare, and unusual postures such as standing on only three legs, its tail held low or between its legs, or holding its tail up and waving it like a flag pole.

Anticipate situations that might cause stress so that you will know when to observe your dog more closely:

If your dog continues to display stress behavior, turn to your veterinarian for advice. They can identify the type of anxiety that your dog is experiencing as well as possible causes and triggers. Veterinarians can also help you come up with a proper treatment plan for your pet.

Note that animal liability exclusions in homeowners insurance policies aren’t limited to specific aggressive breeds. Exclusions can include any dog with a biting history. Learn to recognize when your dog feels uncomfortable using the above tips and get animal liability coverage for your dog if it has a bite history or if its breed is considered dangerous.