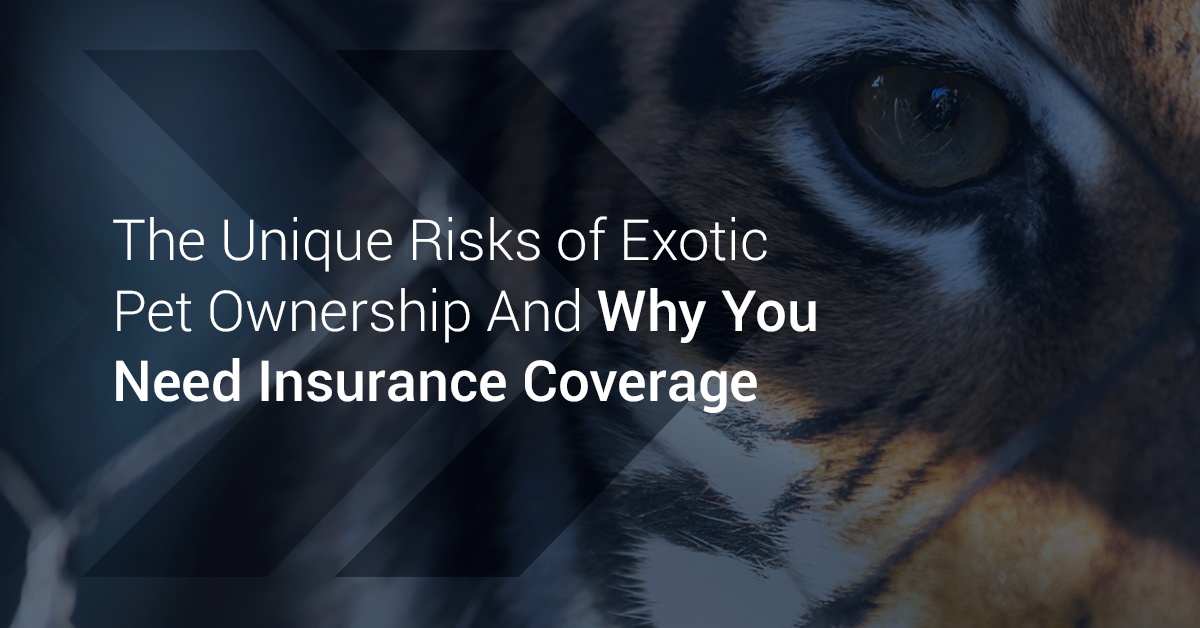 Owning an exotic animal is very different from owning a traditional pet, like domesticated dogs and cats. Exotic pet ownership tends to be more expensive and risky. These pets require more maintenance and supervision than your average house cat or dog.

At XINSURANCE, we strive to be a dependable resource for exotic pet owners. We can provide you coverage solutions if your pet harms someone physically.

Netflix’s “Tiger King” has become widely popular and sparked public debate about keeping big cats in captivity. Many viewers were surprised to find out in the documentary’s first episode that more tigers live in captivity in the U.S. than live in the wild. The documentary has led many to wonder how many legal exotic pets are privately owned and to question the morality of keeping exotic animals in captivity.

With the popularity of “Tiger King,” the focus has particularly been placed on big cats. Is owning a big cat legal in your state? If you do own or plan on owning one of these animals, you should purchase exotic pet liability insurance, as this is a critical element of successful exotic pet ownership.

The following states currently have comprehensive bans on owning an exotic animal:

Other states have implemented partial bans on ownership of exotic pets, which means certain species of animals are banned, but not all. These states include:

Other states require individuals to obtain a license or permit scheme to privately own an exotic animal, while a few other states have no statutory or regulatory scheme about the private ownership of exotic animals.

What Is Exotic Pet Insurance?

What Is Covered in Exotic Animal Insurance?

Many exotic animals have unique requirements, like additional maintenance for their shelter, particular care needs and special personality characteristics to consider. Given these unique circumstances, even well-behaved exotic animals tend to pose a greater risk to the general public. If your exotic pet causes or is involved in an accident, exotic animal liability insurance can provide the coverage you need to resolve the situation successfully.

What Are the Benefits of Having Animal Liability Insurance for Exotic Pets?

If you are not covered by exotic pet liability insurance, you may leave your assets exposed in the event of a lawsuit. Insurance policies are becoming increasingly exclusionary, even restricting policies to certain dog breeds. Some insurance policies completely exclude animal liability coverage. For exotic animal owners, this means your homeowners’ insurance policy likely does not cover your exotic pets.

Fortunately, exotic animal liability insurance can provide exotic animal owners with the coverage they need. Your assets can be protected in the event that an incident involving your exotic pet results in property damage or bodily injury to a third party. This coverage can give you true peace of mind so you can enjoy time with your exotic pet without worrying about an accident.

1. Does Exotic Pet Liability Insurance Cover Injuries to Me or Damage to My Property?

2. Will My Pet Be Dropped From Coverage Due to Age?

3. Can I Cancel My Animal Liability Insurance Policy Before the Term Expires?

You can cancel your exotic animal liability insurance policy at any time. You will need to contact your insurance provider to cancel your policy and may need to cancel the policy in writing. If you cancel before the term is up, you may receive a refund for your unused premium.

4. What Kind of Risks Do Big Cats Pose?

A surge in interest in big cats as exotic pets has accompanied the rise in popularity of “Tiger King.” While many websites purport that holding exotic animals in captivity is highly dangerous, the statistics of recorded incidents are nuanced.

One study showed that from 1990 to 2014, there were around 260 severe or fatal exotic cat attacks. Among those attacks, data shows tigers were the most common species involved, with cougars and lions tied for second place. The largest portion of these attacks occurred within zoos, many of which were accredited by the Association of Zoos and Aquariums. The second-largest demographic for exotic cat attacks was private pet owners.

Though data shows exotic cats can pose a safety risk to the general public when handled improperly, the same is true for domesticated dogs. According to the Centers for Disease Control and Prevention, almost one in five dog bites requires medical attention. The bottom line is that both domestic and exotic pets may present a risk for an accident. Because big cats and other exotic animals often have unique characteristics that can elevate this risk, exotic animal liability insurance can provide even more peace of mind.

If you plan on owning an exotic pet, purchasing exotic pet liability insurance is essential. At XINSURANCE, we believe no one should have to worry about being underinsured. We strive to provide our customers with customized terms and coverage. We minimize exposures to give you the peace of mind you need as an exotic pet owner.

Do you have a question about getting exotic animal liability insurance? Contact us at XINSURANCE for more information, or get a quote from us today. We are happy to answer any of your questions and discuss your insurance needs.