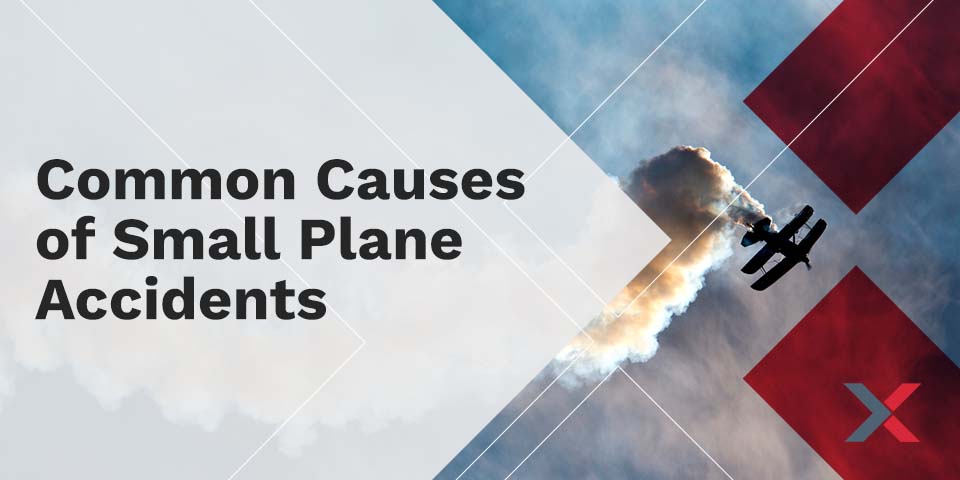 Accidents are a fact of life. Whether you’re driving a car or flying a small aircraft, some degree of risk is always there. When flying, the best you can do to prevent this risk from becoming a reality is to continually hone your skills, be relentlessly methodical and exercise caution. In addition, it’s helpful to understand the common causes of small plane accidents so you can avoid others’ mistakes.

Most accidents are due to pilot error. Piloting a small aircraft is a complex task that presents many opportunities to make mistakes. These often occur during descent and landing, when the pilot must transition out of level flight, gradually lose altitude, approach the runway, then land. The next most likely time for an accident is taking off from the runway and climbing out. Weather effects such as poor visibility or high wind can further complicate takeoff and landing.

In the U.S., small planes fall under the general aviation category, along with gliders, balloons and other small aircraft used by amateur pilots. In 2016, a total of 411 people died in fatal general aviation airplane crashes in the U.S. Meanwhile, small plane accidents accounted for 80% of all aviation fatalities in the EU in 2019. Pilot errors attribute to a vast majority of these fatal accidents, since people with little to no professional experience often pilot private planes.

Inexperienced pilots account for many small plane accidents, which might be due to overconfidence placing them in situations that exceed their abilities. To become a certified pilot for general aviation aircraft, people don’t need to log as many flight hours as they would for commercial flying. Some pilots confuse the length of time they’ve had a pilot’s license with practical flight hours. That is, they fly infrequently but overestimate their skills, which can make them do overambitious things.

From 2011 to 2016, pilots losing control in flight was the leading cause of fatal small plane crashes. Small plane crash statistics reveal that another common reason was “controlled flight into terrain,” which occurs when the pilot cannot detect and react to an obstacle on the ground with enough time to avoid it. Inexperienced pilots tend to have slower and less efficient responses to these unexpected obstacles.

Inadequate preflight planning and inspection are other types of pilot error. While commercial airliner pilots have stringent procedures, the rules for general aviation are generally much looser. Whether mistakes occur because of distraction, complacency or inexperience, they may set the pilot up for an accident at some later point in the flight. Common pilot errors include oversights such as running out of fuel, using the wrong fuel, overloading the plane or taking off in a poorly balanced craft.

While mechanical error from defective parts is not unheard of, it more likely results from failing to keep up with maintenance or sloppy updating of maintenance records.

The preflight inspection covers many vital components such as the free movement of the elevator and rudder, flap and aileron integrity, tire condition, landing lights, pitot tube and so forth. Treating this inspection as so much busywork can cause the pilot to overlook a severe mechanical problem.

Commercial airline pilots must follow specific laws and regulations that help ensure safe and efficient operation during flight. However, these rules do not usually apply to small planes. Instead, the preflight inspection depends on the pilot’s judgment and experience, meaning an inexperienced pilot could deem their aircraft airworthy despite significant oversights.

Sometimes an accident happens because of an honest oversight of the pilot or a trusted employee. Even if they aren’t the sort of people to cut corners, the risk of a small plane accident will never be zero. It’s always there. When an accident happens, the pilot may be liable for what happens to the passengers or people on the ground.

Small airplanes are more prone to mechanical faults due to the lack of regulatory equipment. Dangerous designs and defective parts may be the actual cause of some private plane crashes that get attributed to pilot error.

In 2014, a USA TODAY investigation uncovered several fatal defects that have persisted in aircraft design for years: 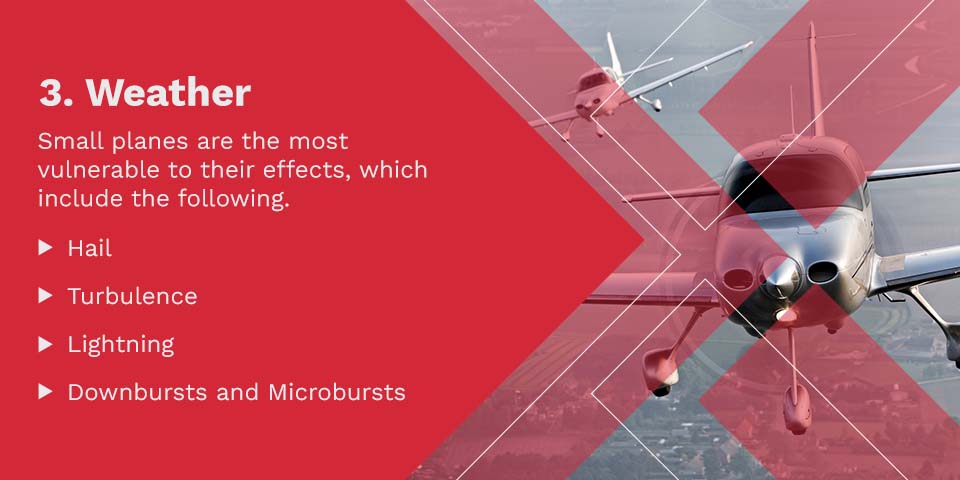 Summer is the time of year when pilots like to enjoy the freedom of the skies with their small aircraft. The pilot need not worry about the snow and ice storms of winter. But summer brings the risk of thunderstorms, which are more likely to catch pilots off guard. Winter storms give more advance warnings because they take longer to develop and move more slowly. By contrast, thunderstorms form rapidly, move fast and grow quickly in size.

According to the FAA, commercial flight delays peak during the summer months. The principal reason is the convective weather associated with thunderstorms. Flying in a thunderstorm is as dangerous as flying in a hurricane, except hurricanes take time to gather strength and move in from somewhere else. Thunderstorms often pop up locally.

Thunderstorms present the worst dangers to aircraft, both large and small. However, small planes are the most vulnerable to their effects, which include the following.

Whether you are taking people up for rides or are planning a cross-country adventure with a best friend, make sure you have all your liabilities covered. Anyone suffering injury or property loss as a result of a flying accident can take you to court. Don’t trust your financial well-being to luck because the dangers of summer flying are real. Thunderstorms are dangerous, frequent and can catch you off guard.

While most wildlife strikes only cause minimal damage to the airplane, some bird strikes pose a serious threat to the pilot’s physical and financial safety.

Airport grounds are an attractive habitat for many wildlife. Bird strikes tend to cause the most damage to the plane’s engine or wing and usually occur during takeoff or landing. If a collision causes mid-air engine failure, the results can be hazardous for general aviation aircraft, which typically only have one engine. Pilots may even lose total aircraft control depending on the circumstances.

An impact’s effect generally depends on the size of the bird vs. the size of the plane. A smaller aircraft is more likely to sustain structural damage on the windscreen, empennage or control surfaces. Windshield penetration may also injure pilots, causing them to lose control of the plane.

Most small-plane accidents occur on the runway as a result of inadequate landing conditions. General aviation aircraft usually land at small general aviation airports that require pilots to land on unconventional runways, where they must perform riskier landing procedures.

Hazardous landing conditions may result from a few factors. 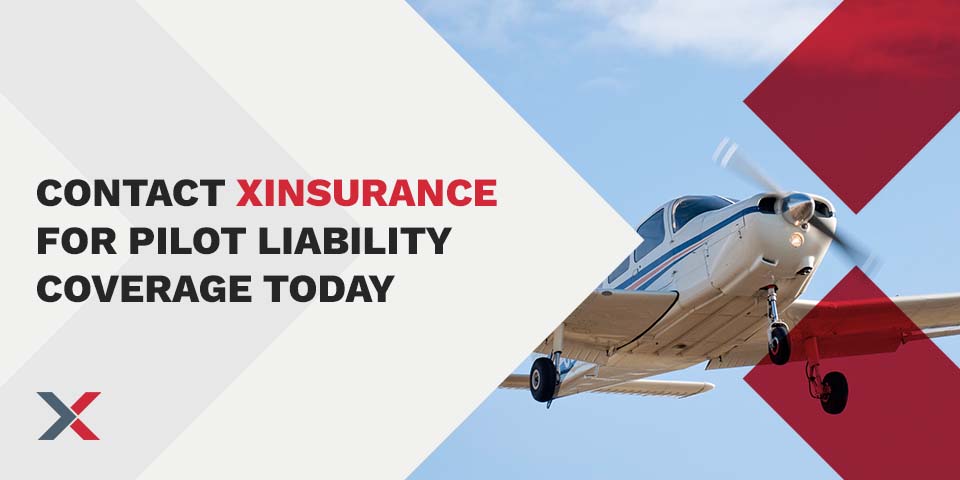 Pilot errors, mechanical faults, inclement weather, wildlife strikes and unconventional landing conditions have contributed to small aircraft accidents worldwide. These factors may impact your flight at any time. You must protect your financial well-being and your passengers with adequate pilot liability insurance. For information about pilot liability insurance and how it applies to your situation, contact us today.